Will the real Barack Obama please stand up? 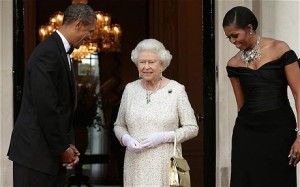 Exactly 6 days after he delivered his “much-anticipated” speech on Middle East policy and 3 days after he delivered an address to AIPAC  speaking on many of the same topics, President Obama spoke to both houses of the British Parliament  about US-British relations. The American press hailed the first speech as a “reset on Middle East policy”, and bloggers and writers claimed that the US had finally thrown full support behind the Arab Spring. Pro-Israel writers followed Mitt Romney’s example and bemoaned the President’s proclamation on the 1967 borders as an act of throwing Israel under the proverbial bus. But as an activist and humanitarian, his speeches spoke to me not of the bold moves of a visionary leader but of the delusion and condescension of a Bush Era henchman.

Cutting through the rhetoric and niceties to the actual policy implications of his speech on Thursday, showed that Obama was merely spelling out an extension of the US policy of placing American security and economic interests in the region above all else. Even while pledging to support protesters, Obama continued to ignore their foremost demand; just as he had done with Tunisia, then Egypt. His harshest words, to President Al-Assad, spoke volumes. “President Assad now has a choice: He can lead that transition, or get out of the way.” Lead the transition? How can a man who has waged war on his people, shooting down hundreds if not thousands of protesters while injuring and torturing many more, lead a transition to democracy? Since that first fateful Friday in December when Tunisian vendor Mohamed Bouazizi set himself on fire, the central rally cry of the revolution has been the toppling of the current regimes in the Arab world.  “The people want the end of the regime” has resounded from square to square telling the world that those who rejected democracy and favored corruption for decades cannot, in one magical act of schizophrenia, turn around and lead their governments into a democracy! Apparently Obama has not been listening. A fact only reinforced by his deliberate failure to even mention Saudi Arabia’s massive military campaign against protesters in Bahrain and Yemen. Clearly US-favored stability at the cost of freedom of expression and self-determination is still the policy.

As for the now oft-cited recognition of the 1967 borders, I guess a congratulations is in order to our dear president for finally recognizing what has been decided by international law and affirmed by the global  community and humanitarians every where years ago. But before we jump on the US love boat and hail this step as revolutionary, let’s look at Obama’s speech to AIPAC only 3 days later. Stating that his ultimate priority was Israel’s security, Obama once again re-affirmed the stagnation of American foreign policy. Although he may stand before the world and claim an interest in the humanitarian objectives of both peoples, the reality is that his stance behind Israel is, in his own words, “ironclad”. His desperation to show Israel’s biggest lobby that nothing had changed in US support for Israel was disgusting and shameful considering the Israeli record of human rights violations and unlawful aggression.  Nowhere in either speech did he care to mention the unequal power dynamic between the two players or, while he harped on Palestinians for ending negotiations, Israel’s tendency to violate treaty after treaty after treaty. For Obama, Israel is not a means to peace, but an end in itself, just as it was for Bush and his predecessors.

If these two speeches left me dejected and disappointed, Obama’s talks in Great Britain left me nothing short of heartbroken. I watched as the ex-community organizer from Chicago who once, in near memory, embodied hope and progress, tolerated the superfluous ceremonies of a monarchy smeared with the legacy of colonialism and Eurocentrism. Then that same Obama stood before a podium and reminded his audience that the world still needed US-Brittish leadership, which had not ended. To an audience of British parliament members perhaps this was welcome news. But to those of us who know that leadership for what it was and is, a self-interested, opportunistic tendency to use military and economic prowess to trick the developing world out of its resources and self-determination, this was anything but good news. As Obama condescendingly clung to Western hegemony, his rhetoric echoed the exceptionalism we had become so accustomed to in the 8 years before his election. “It’s very hard to sit across the table from a party that is denying your right to exist, and has not renounced the right to send missiles and rockets into your territory,” he said matter-of-factly speaking of Fatah’s power-sharing alliance with Hamas (which is preventing civil bloodshed between Palestinians as we speak). Could the Palestinians not say the exact same thing to Israel, Mr President? Ironically, in almost the same breath, he re-iterated his opposition to Palestinian statehood being brought to the UN this fall. A dismissal of the UN and its role chillingly reminiscent of Bush Doctrine policies.

As I watched all this unfold I could not help but recall that historic speech to the Muslim world two years ago in which Barack Obama said “I have come here to seek a new beginning between the United States and Muslims around the world, one based upon mutual interest and mutual respect”. A speech in which he recognized the harms done to the Muslim world by the very American-European leadership he today tries to revive. “Tension has been fed by colonialism that denied rights and opportunities to many Muslims, and a Cold War in which Muslim-majority countries were too often treated as proxies without regard to their own aspirations.” I could not bear the juxtaposition of the image of a politically young, newly elected Obama standing in front of a red curtain speaking of change, progress and equality and the image of a wizened president touring Buckingham palace with her majesty the queen and referencing the good ol’ days of uncontested US hegemony with Britain as its faithful sidekick.  I cannot help but wonder if in 2009 Obama only spoke in Cairo assuming that he would not be called to substantiate his promises because the Arab world would always be chained into submission by its dictatorial US allies. Or, perhaps in the time the Arabs have used to lift their chains, Obama, the community organizer, has incurred a set of his own. Either way, this is not the man next to whose name I proudly blackened a small black oval on November 4th, 2008.